The STEPS Resource Politics conference brought together people with a wide range of perspectives who approached the conference subtitle – Transforming Pathways to Sustainability – from academic, policy and activist positions. 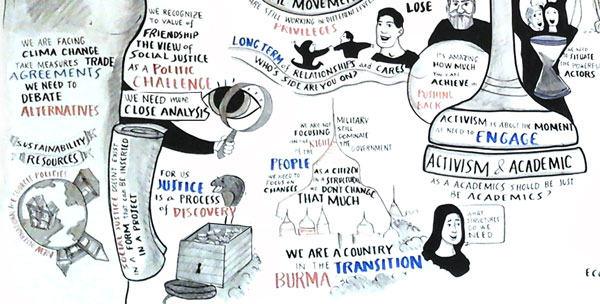 Alongside the conference’s official five themes, other topics emerged again and again, both in the plenaries and in the panel discussions. These included notions of friendship, optimism and emotions; the role of academia in activism and the building of communities; and pathways to transformation.

]In the first plenary of the second day, Nick Hildyard directly addressed the question of how to bring about transformative change.

Hildyard questioned the framing of social justice as a problem of policy approach. Instead, he argued, justice arises from an expansion of awareness of oppression. In that context, friendship – ‘the long term building of relationships of care’ – become not only an important goal in itself, but also an organising ethos for campaigning.

This approach was reflected in the experiences described by members of the panel on Feminist Visions for Sustainability. Building on many years of experience as both academics and activists, the panel presented feminist perspectives on resource politics.

Dianne Rocheleau questioned the use of the word ‘resource’ in the title of the conference. She argued that the term ‘instrumentalises’ nature, framing it as something to be used – and owned – by people. This gives rise to the valuation of natural resources and the political and economic contestation over resources discussed elsewhere in the conference.

Instead, Rocheleau presented a feminist political ecology approach, calling for a move beyond resistance to the politics of resource use to new ways of thinking about how people exist in the world in relation to nature and to each other.

Research: not ‘about’ people, but ‘with’ them

Other panellists expanded on these ideas by reflecting on their own experiences as researchers. Angelica Maria Ocampo Talero asked how we can do research with others, rather than about them, noting the extractive nature of much academic research.

This raises questions about the ethics and politics of knowledge creation. It challenges academics to incorporate and acknowledge our own position in order to create the space for dialogue with, and learning from, others who consider themselves as producers of knowledge.

Giovanna di Chiro’s description of her work with the Young People’s Just Transition Project explored these relationships further. Di Chiro questioned the responsibility of an academic institution to its neighbours and their social justice struggles. She suggested that academics can make a choice to see themselves as ‘entangled’ with the local community, rather than going elsewhere for either research or activism.

This ‘entangled’ vision situates the academic both in their academic community and in their local community as active citizens, and helps to build ‘relationships of care’. It also creates new pathways to social sustainability at the local level.

It’s an approach which can be strengthened in Sussex, through initiatives such as the Brighton and Sussex Universities Food Network, which is working with local community food groups on co-designing research projects on issues identified by activists, including food poverty and food waste.

All these approaches aim to address the question of how to create the ‘we’ that will come together to bring about transformation. They take as a starting point the building of communities and the need for an emotional (rather than just academic) response to issues of social injustice. While these ideas were perhaps raised in discussions around the main conference themes, I think they are central to thinking about how to transform pathways to sustainability.

Image: Graphic panel from the conference, drawn by Raquel Durán (see the gallery of images for full versions).